Syria, November 2005:  When I learnt that the Hejaz Railway was actually still operational, I knew I had to ride it. I’d always admired David Lean’s classic 1962 film “Lawrence of Arabia”-and to actually ride the rails that T.E.Lawrence and his band of Arab rebels had so successfully attacked and destroyed- well it just had to be done…

While in Damascus I ran into Ian again (having met earlier in Beirut), an Aussie traveller on a 2-3 year trip with no real itinerary. I told him of my idea to ride the Hejaz to Amman and he was keen to come along. So on a bitter November morning, we flagged a cab and drove through the dirty back streets to the outskirts of Damascus. It had been raining most of the night and the temperature had dropped dramatically. At the deserted Khaddam Station we searched around looking for someone of authority, eventually tracking down a man who directed us to a run down looking building. 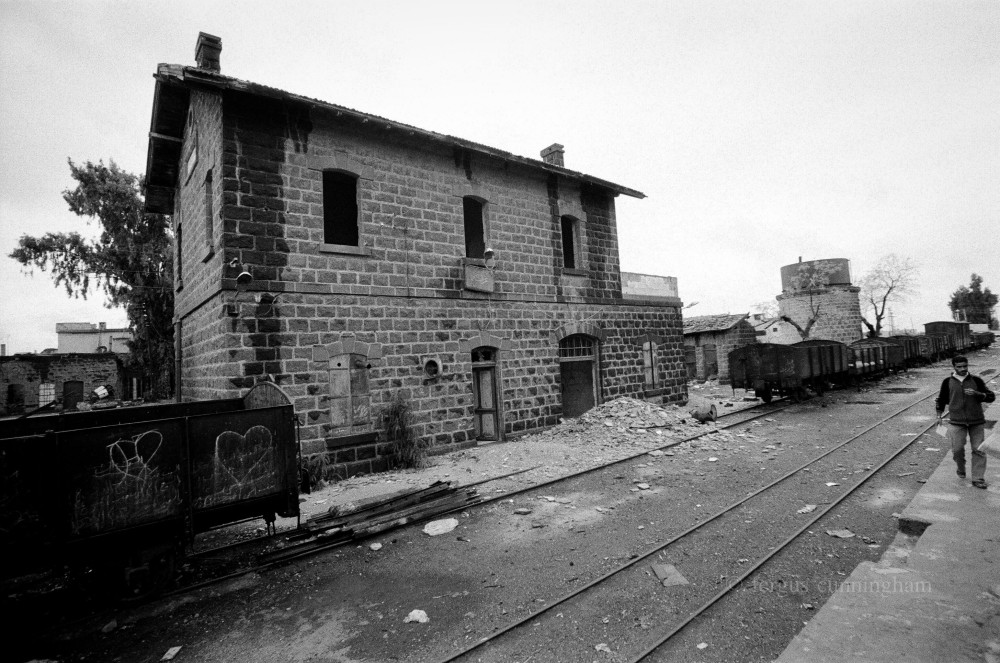 The big man at the desk questioned us briefly, then on figuring out we were too inept to be spies sent us downstairs again. A while later another man strode out and gestured towards us. We followed him out to a platform, a newish train was parked up purring, ready to go. But no, we carried on past it and followed the man as he jumped down and crossed the tracks. We caught up to him standing in front of a derelict shed. He gestured us inside. An older man with a bushy beard sat behind the desk. He asked me in broken English “what do you want”? “We want to get the Hejaz train to Amman in Jordan” I said. He replied incredulously “why not get bus”? He had a point, it would have been way easier and quicker- five hours instead of ten to twelve. We stood our ground and after a long silence begrudgingly set about issuing us with what amounted to tickets.

We left the ticket office on a high and asked a man which one of the two trains at the platform was the Hejaz. He shook his head and pointed in the opposite direction. We turned but could only see on the far side of the yard a bedraggled cluster of carriages. Turning back to look at him he nodded his head and said “yas”… I couldn’t believe it and burst into an uncontrollable fit of laughter- he was not impressed.

The Hejaz Railway was a narrow gauge railway that ran from Damascus in Syria, to Medina in Arabia. It was named after the Hejaz region in Saudi Arabia it connected with. It was a part of the vast Ottoman railway network and was built to extend the line from Istanbul in Turkey, through to Damascus and on to the holy city of Mecca. It reached no further than Medina- 400 kilometres (250 miles) short of Mecca- due to the interruption of the construction caused by the outbreak of World War 1.

The main purpose of the railway was to establish a connection between Constantinople (Istanbul), the capital of the Ottoman Empire and the seat of the Islamic Caliphate, and Hejaz in Arabia, the site of the holiest shrines of Islam and the holy cities of Mecca and Medina. Another important reason was to improve the economic and political integration of the distant Arabian provinces into the Ottoman state, and to facilitate the transportation of military forces.

The sole passenger carriage consisted of eight compartments made of dark, dirty wood and worn out leather seats, springs bursting out at the seams. I found the name and date of the manufacturer of the carriage- Nuremberg, Germany 1905.

Soon after boarding a bearded man in his mid 30’s turned up. Yusuf was his name, he would be our “supervisor” throughout the journey. We were the only foreigners on board, with just a handful of locals in another carriage. The first thing he said- his way of introduction- was, “no photos”. Without a doubt Yusuf was an informer for the secret police, the Mukhābarāt. He was a typically friendly Syrian though, a nice enough chap, I just wish he would have left us alone so I could have taken some photographs. 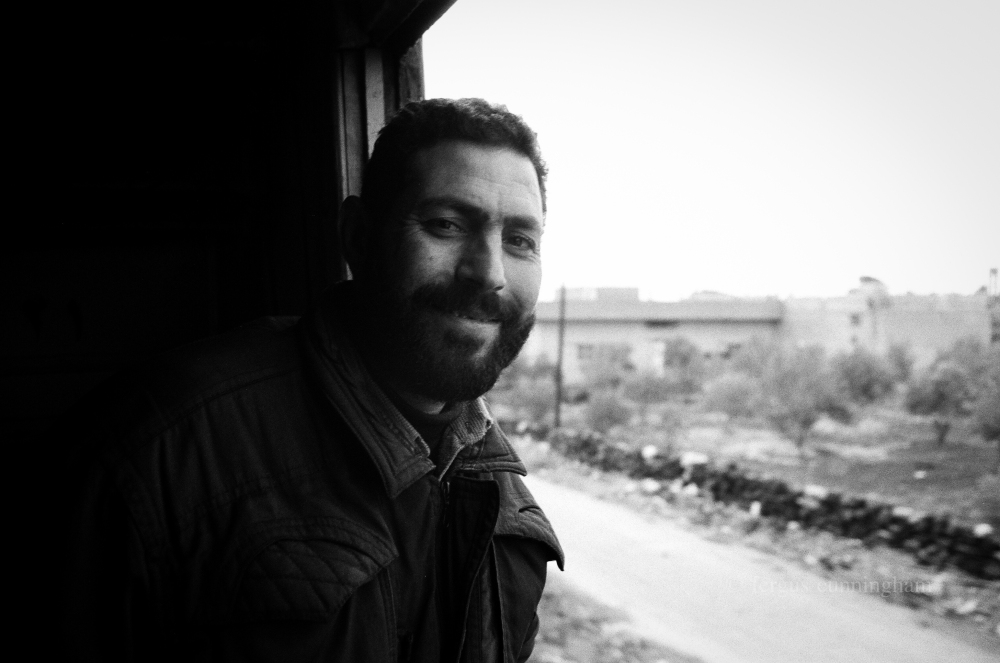 We eventually drew out of the station and crawled through the dirty, derelict outer suburbs and into a vast army base South-East of the city. There were scatterings of buildings, training areas, troops, tanks and bunkers as we crawled through the camp. 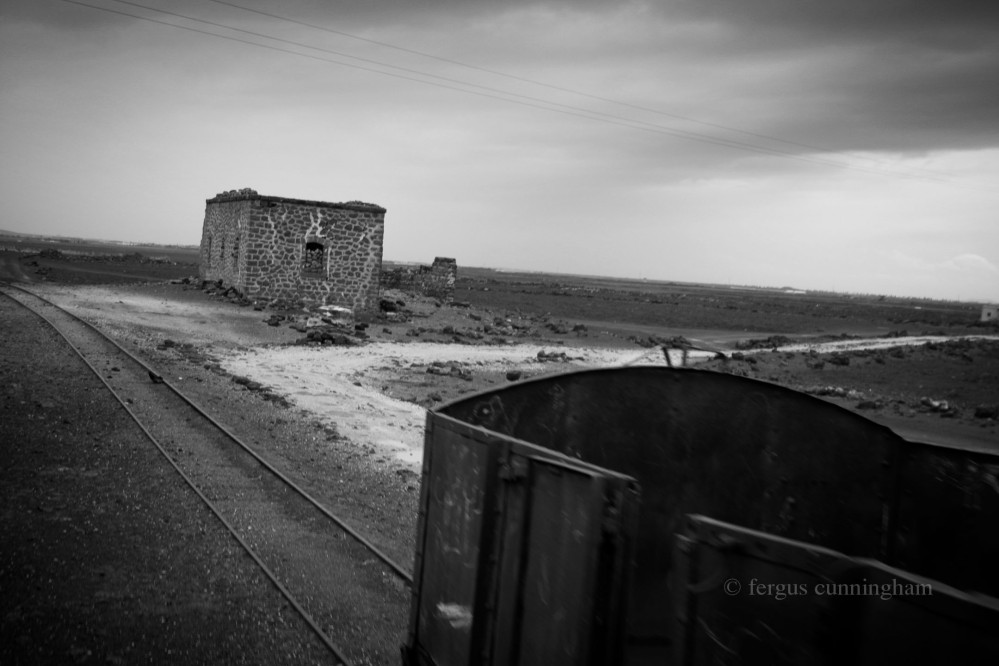 It took at least 30-40 mins to chugg through the vast sprawling army base- but then this was one of the slowest (and oldest) trains on the planet. When we finally cleared the vast defence perimeter and were in the desert proper, Yusuf finally announced it was ok to take pictures- but by then there was nothing to take photos of…