Vukovar, Croatia, 2002: Vukovar was utterly destroyed after a three month seige against the mostly Croat defenders by the Serb-dominated Yugoslav Army (JNA) in November 1991. Some estimates are that Serb gunners fired a million shells into Vukovar destroying 15,000 buildings. It was the first European city since WWII entirely leveled to the ground, it was just the first. At least 3,000 people were killed and 20,000 “ethinicly cleansed”…  The city was still a jigsaw of destruction 10 years later… 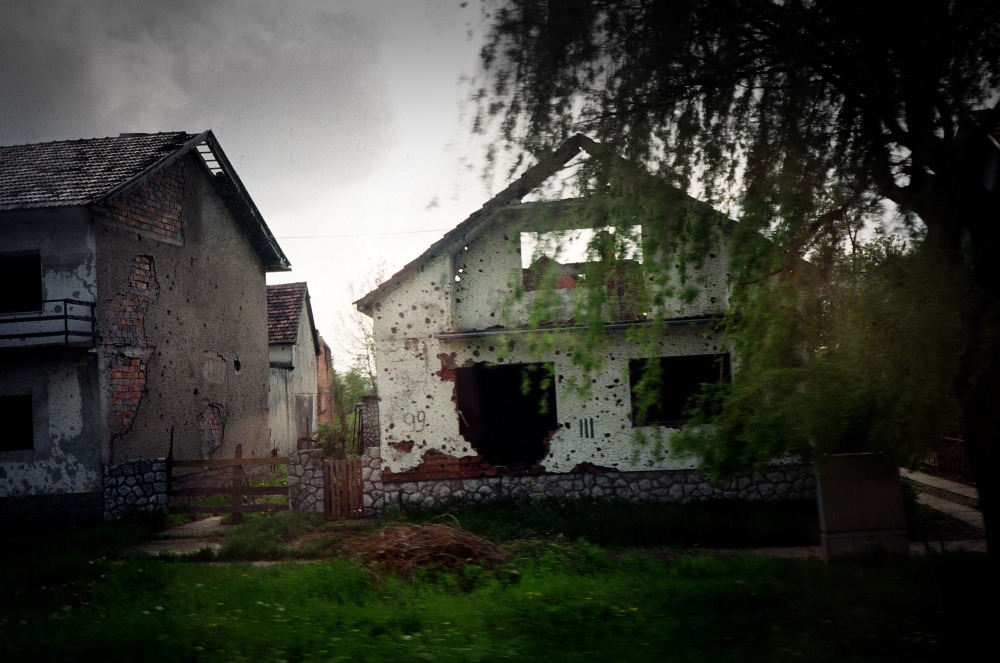 Lucily there was a bus soon that could take me across the border to Novi Sad in Vojvodina, Serbia. It eventually arrived I was relieved to board and escape the doom of Vukovar.  The feeling of escape was brief. The locals on the bus made that feeling plain.  At the Serb side of the border, a burly guard boarded and made his way down the aisle checking id’s. When he got to me and I pulled out my Kiwi passport  I was sure he was just going to have a cursory look and hand it back. Instead he clenched it in his fat fist and ordered me off the bus…

I was led into a typical bunker type building and forced into a seat. The commandant behind the desk sneered at me and barked out some questions in Serbian. There were a few other big uniformed men in the room, luckily one of  them spoke some broken english and could vaguely translate. I didn’t have an entry visa, but was supposed to be allowed (as a Kiwi without a  Serbian consulate in NZ) to buy a visa on arrival.   After what seemed like hours of questioning with me crapping my pants and trying to argue I had a right as a NZer to purchase a $10 visa on arrival- they insisted I pay $30 euros get-out-of-jail fee.

I was released and led back to the bus where I was made to feel most un-welcome. If starring daggers could be made literal, I was a pin-cushion. I’d only just made myself comfortable when another uniformed man boarded and made his way directly to me. He ordered me off and said I hadn’t passed customs. I paid him off as quickly as possible as it was my only option. Boarding the bus once again the daggers flew but just seemed to bounce off… Olympus XA2

One thought on “Vukovar”